Ian Robertson is Psychology Professor at Trinity College Dublin, University College London and University of Texas at Dallas and best selling author of  The Stress Test, The Winner Effect and Mind Sculpture.

He  one of the world’s leading researchers in neuropsychology and as a trained clinical psychologist, Dr. Robertson is an expert at applying the latest psychological and neuroscience research to contemporary political, health, social, economic and business affairs in a very accessible manner.

In The Stress Test: How Pressure Can Make You Stronger and Sharper, Professor Robertson, armed with over four decades of research, reveals how we can shape our brain’s response to pressure and answers the question: can stress ever be a good thing? The Stress Test is a revelatory study of how and why we react to pressure in the way we do, with real practical benefit to how we live.

Ian writes for several publications including Nature, Journal of Neuroscience, Psychological Bulletin and London’s Daily Telegraph, as well as for the Guardian and Times. His numerous articles and blogs on contemporary and business affairs in the international press have been widely acclaimed. One recent article, in London’s Daily Telegraph, was described as “a sensation” by its editor.

He holds the Chair in Psychology at Trinity College Dublin and is a visiting professor at University College London. Dr. Robertson is also T. Boone Pickens Distinguished Scientist at the Center for BrainHealth at The University of Texas at Dallas. He has held senior academic appointments at Cambridge, Edinburgh and Columbia Universities. He has also been elected a Fellow of the US Association for Psychological Science and the British Psychological Society.

Ian’s books, The Winner Effect, Mind Sculpture and The Mind’s Eye, have been translated into dozens of languages. In The Winner Effect, Ian describes the mental and physical changes that take place in the brain of a “winner,” how they happen, and why they affect some people more than others. He explains the science behind success and how individuals, teams, businesses and even countries can build success by using this knowledge.

He is an engaging presenter who can hold an audience’s attention for extended periods through his uniquely interactive style of presentation. He captivates and activates audiences during his presentations and workshops at leadership, business, political, social policy and educational conferences across the globe. Participants leave with tangible take-home messages and practical strategies for change.

“Our conference of over 150 delegates were intrigued by Ian Robertson’s presentation on the brain and its linkage to business performance. The concept of celebrating the little wins as a means to programming the brain for those bigger wins was just one of the many take-aways. Ian’s passion for his subject, his many easy to follow examples combined with an entertaining delivery performance made for a very enjoyable and educational session”  Kevin O’Connor, Guild CPO Inc

“Ian has an amazing intellect with a brilliant understanding of brain performance, which he brings to his audience with uncanny ease and spontaneity”  Sanjiv Das  |Former Global CEO of Citi Mortgage

“Ian has one of the best minds in the world on the understanding of brain performance. Coupled with his brilliant delivery, Ian’s impact on the commercial world can be as immense as that of a Steven Levitt or a Daniel Kahneman”  Kusum Das Founder – Simply for Homes

Ian’s presentation to a group of European senior financial executives on harnessing stress for success was described as “fantastique”. His combination of cutting-edge neuroscience with real down-to-earth practical tip is hugely appealing to corporate leaders. 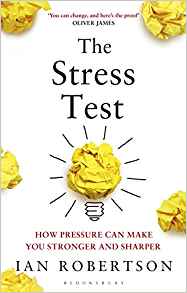 Why is it that some people react to seemingly trivial emotional upset – like failing an unimportant exam – with distress, while others power through life-changing tragedies showing barely any emotional upset whatsoever? How do some people shine brilliantly at public speaking when others stumble with their words and seem on the verge of an anxiety attack? Why do some people sink into all-consuming depression when life has dealt them a poor hand, while in others it merely increases their resilience?

The difference between too much pressure and too little can result in either debilitating stress or enduring demotivation in extreme situations. However, the right level of challenge and stress can help people to flourish and achieve more than they ever thought possible.

In The Stress Test, clinical psychologist and cognitive neuroscientist Professor Ian Robertson, armed with over four decades of research, reveals how we can shape our brain’s response to pressure and answers the question: can stress ever be a good thing? The Stress Test is a revelatory study of how and why we react to pressure in the way we do, with real practical benefit to how we live. 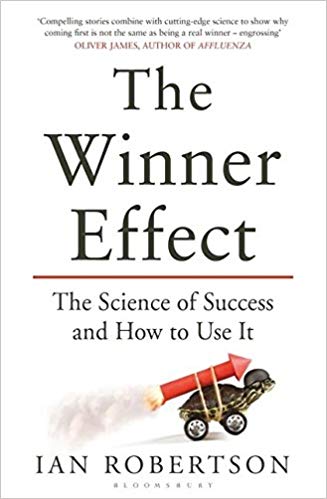 What makes a winner?
Why do some succeed both in life and in business, and others fail?

The ‘winner effect’ is a term used in biology to describe how an animal that has won a few fights against weak opponents is much more likely to win later bouts against stronger contenders. As Ian Robertson reveals, it applies to humans, too. Success changes the chemistry of the brain, making you more focused, smarter, more confident and more aggressive. And the more you win, the more you will go on to win. But the downside is that winning can become physically addictive.

By understanding what the mental and physical changes are that take place in the brain of a ‘winner’, how they happen, and why they affect some people more than others, Robertson explains what makes a winner or a loser – and how we can use the answers to these questions to understand better the behaviour of our business colleagues, employees, family and friends.

Discover how your brain is physically changed by what you do and think. How education moulds your brain, growing new connections between brain cells, building brain power, and proving it’s not all down to genetics.

Her fee to present on both is $40K USD plus five star hotel (The Corinthia Hotel) flights from Dublin and ground transportation.

Suppose we discover something that could make us richer, healthier, longer-living, smarter, kinder, happier, more motivated and more innovative. Ridiculous, you might say … but, in fact, we already have. What is this elixir? Confidence. And it is to human endeavour what food is to the body – without each, both would wither.

If you have it, it can empower you to reach heights you never thought possible, but if you don’t it can have a devastating effect, despite your objective achievements.   Confidence affects every emotion and thought in our mind, every neuron in our brain, every ounce of our motivation and each action in our daily life. This is because the human mind is a prediction machine, like any good organization orchestrating its activities according to what it expects to happen in the future.

Confidence is above all an ingenious prediction device that humans evolved to help them survive and flourish. And above all, confidence is about predicting success – whether that is in sinking a putt at golf, giving that public talk or re-calibrating one’s life after an unhappy breakup.  And here is the good news: confidence can be learned.

The Era of Mind

For thousands of years, humans believed themselves to be under the control of mysterious supernatural forces which had to be divined and appeased. This was the Era of God and it lasted for millennia. Then came the Enlightenment and the impulse to identify the laws and associated mechanisms of how things worked in the natural world, culminating in the incredible theories of Rutherford, Einstein, Heisenberg, Bohr and others in the early 20th century. This was the Era of Physics. Then came the union of physics and biology that culminated in the discovery of the structure of DNA by Crick and Watson, the sequencing of the human genome and the development of gene editing techniques such as CRISPER in the early 21st century. This was the Era of Biology. Now, however, we are facing into a new era, whose currency is neither gods, electrons nor molecules, but information. The leading companies in the world are no longer purveyors of minerals, fossil fuels or foodstuffs – Google, Facebook, Microsoft and Apple are all principally traders in information. And the medium for the deployment and adding-of-value to this information is – until and unless it is superseded by artificial intelligence – the human mind. But as we enter this new era, we are shackled to a dangerous fatalism about human behaviour that has a malign self-fulfilling quality to it. But more importantly, such fatalism destroys the essential ingredient of human adaptation to the existential challenges facing us – confidence in our capacity to shape our own destiny as individuals – and as a species. Embracing the dizzying challenges that we face as a species means that we have to shed this fatalism and fully embrace the Era of Mind by understanding the pitfalls and opportunities that this mental world of information present.

This site uses Akismet to reduce spam. Learn how your comment data is processed.