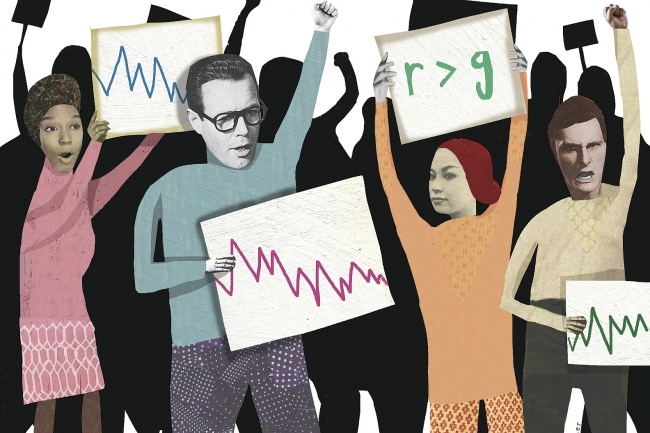 For all the influence economics is supposed to have on policy and the character of our societies, not many economics professors make any impression on public consciousness. Fewer still attain Thomas Piketty’s rock-star status (well, minor rock star, at any rate) upon the publication in English of his Capital in the 21st Century, in 2014, by Harvard University Press. Piketty captured and confirmed something that many people believe to be the case, given their own experience and observation: that inequality in Western economies has increased to a great degree.

Many economists see Piketty’s dedicated effort — with his colleagues Emmanuel Saez and the late Tony Atkinson — to put together the data on income and wealth over a long period of time as the main merit of his work. While there is some debate about the figures, this effort is a titanic contribution to knowledge, making possible further study of the trends and causes of inequality.

After Pikety: The Agenda for Economics and Inequality Edited by Heather Boushey, J. Bradford DeLong

The essays in After Piketty have a different focus, however: an assessment of his arguments about the dynamics of capitalist economies that generate income and wealth inequality. Some of these perspectives concern the economics, others the links between economic and social or political forces.Piketty’s empirical observation is that inequality in the Western economies declined through the middle of the 20th century, but that from around 1980 it started to increase again, to return to the levels of the Gilded Age. His theoretical argument is that there is an inherent dynamic in economic growth that tends to increase inequality, a dynamic halted and reversed in the 20th century by the two world wars, the postwar welfare state and social-market economies (especially in Europe), and rapid postwar growth.

The key point he makes is that when the growth rate slows, the rate of return on capital falls more slowly, increasing the ratio of capital to income and further widening the gap. This is the r>g formula that was fashionably adorning some T-shirts for a while.

In this special spring books issue, Peter Dougherty, stepping down from Princeton University Press’s directorship, says editorial imagination is the key to scholarly publishing’s future. Bruce Walsh, of the U. of Regina Press, explains how he plans to open Canadians’ eyes to their nation’s history. We profile Chris Lebron, whose new book contextualizes #BlackLivesMatter, and Yascha Mounk, whose theories about threats to liberal democracy have turned out to be more timely than he wished. Also featured are reviews of books on writing, social media’s effects on civic order, and capitalism’s contradictions. Then, just for fun, play Promotion, which combines strategic thrills and existential nausea for a one-of-a-kind gaming experience.

For economists, there is nothing inexorable about this. As Paul Krugman points out in his essay in After Piketty, the theoretical argument depends on (among other things) it being easy enough to substitute machines for workers, and there is no definitive empirical evidence that this is so. Devesh Raval points out a number of other problems. Among them, Piketty uses the term “capital” as an abstraction, but the empirical claim that r>g conflates physical capital used in production, housing capital, and the human capital resulting in high earnings for some people. Indeed, the share of top incomes coming from earnings (rather than rents and dividends) is a great contrast with the inequality of the early 20th century. Suresh Naidu underlines this point, calling Piketty’s argument “institution and politics free”: “When wealth is understood as police-backed paper claims over resources, rather than the resources themselves, the undemocratic nature of wealth inequality becomes much clearer.” A number of other essays in the volume round out the economists’ (sympathetic) critique of Piketty’s book.The two subsequent sections cover extensions of Piketty. His collaborator Emmanuel Saez argues for continuing and extending the data-collection effort. This is a significant point: Phenomena for which the data are not readily available are invisible in political and policy discourse. In many ways Capital in the 21st Century was published much too late. The political consequences of great inequality were already playing out in the anger and division so visible now in politics in the United States and across Europe. Saez makes the point that although there has been substantial data collection since the 1960s and ’70s on individual incomes, largely through surveys, this statistical approach severs the connection between income distribution and macroeconomic outcomes. Economists in the late 20th century thinking about the economy in the aggregate largely stopped noticing the macro-level inequality trends. There is little reliable data on wealth (as opposed to incomes) at all, and research into wealth distribution and its evolution is correspondingly sparse (as Mariacristina De Nardi and her co-authors point out in their essay).

Filling some of the other research and policy gaps will be crucial for anyone who considers the extent of modern inequality to be problematic. One made visible by the British E.U. referendum and the U.S. presidential election is the spatial dimension. Economies have a geography, something that economists have until recently been prone to overlook; financial capital is highly mobile geographically and — as Gareth Jones points out here — has also created “extra-legal” zones in tax havens where it can safely land. (In a fascinating book, Capital Without Borders [Harvard, 2016], the sociologist Brooke Harrington documents wealthy individuals’ ardent belief that they have a moral responsibility to safeguard their wealth from government expropriation, or what many of us would call “tax.”) Heather Boushey explores in After Piketty the implications for women’s economic and political autonomy of “patrimonial capitalism,” particularly given the gender bias of inheritance.

The book ends with some reflections from Piketty himself. He is disarmingly open to critiques of his work: “I would like to see Capital in the 21st Century as a work-in-progress of social science rather than a treatise about history or economics,” he writes, arguing that all social-science disciplines are needed for a complete picture. However, the critiques matter, at least to the extent that one thinks the current degree of inequality is unsustainable

Two other recent books point to contrasting possible futures. In The Great Leveler (Princeton University Press, 2017), Walter Scheidel paints a picture not unlike Piketty’s of an inexorable internal dynamic whereby societies become progressively more unequal, until this provokes a reset through war or revolution. In contrast, Tony Atkinson’s Inequality: What Can Be Done? (Harvard, 2015) presents a pragmatic 15-point list of policy measures to limit and reduce inequality. When these are taken together, it is hard to avoid the conclusion that if you do not adopt the Atkinson approach, you get the Scheidel outcome. This was exactly the realization that led to the creation of the postwar social contract in the late 1940s.The editors’ introduction in After Piketty zeros in on this contradiction at the heart of Piketty’s work and its reception: Are there fundamental, intractable laws of capitalist dynamics, making garden-variety policy analysis of inequality ultimately futile? Or, rather, are there “historically contingent and institutionally prescribed processes that shape growth and distribution?” Capital in the 21st Century does not resolve this; neither do the essays in After Piketty. Perhaps it is a purely academic question, but to the extent that any of us are troubled by the new Gilded Age, we have to act as if the second possibility is true regardless.

Diane Coyle is a professor of economics at the University of Manchester and co-director of Policy@Manchester.

To book Diane to speak at your next event: email: Sandran@connectspeakersbureau.com or call + 353 1 2354905