Gillian Tett, chairman of the US Editorial Board and America Editor-at-Large, Financial Times is one of the world’s preeminent authorities on capital markets and the role they play in the global financial crisis. She is widely credited with being the first to cover the credit crunch in the mainstream press and has won several awards including, the UK Speechwriters’ Guild Business Communicator of the Year 2012, Journalist of the Year 2009 and British Business Journalist of the Year 2008 at the British Press Awards, the Wincott Prize in 2007 Columnist of the Year at the 2014 Press Awards and the 2014 Marsh Award by the Royal Anthropological Society. 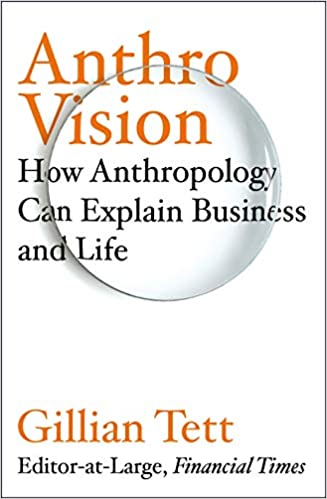 Her latest book Anthro Vision how anthropology can explain business will be published in June 2021.

For over a century, anthropologists have immersed themselves in unfamiliar cultures, uncovering the hidden rituals that govern how people act. Now, a new generation of anthropologists are using these methods in a new context – to illuminate the behaviour of businesses and consumers around the globe.

In Anthro-Vision, Gillian Tett – bestselling author, Financial Times journalist, and anthropology PhD – reveals how anthropology can help make sense of the corporate world. She explains how to identify the ‘webs of meaning’ that underpin consumers’ behaviour on the other side of the planet. She reveals why ‘sense-making’ can explain the most erratic behaviour of Wall Street bankers, and why concealed systems of barter shape our relationship with Silicon Valley. She delves into the cultural shifts driving investment in new markets and green issues. And she reveals what anthropology can tell us about our own workplaces, too: by identifying the hidden tribes within the office, or pinpointing which rituals are binding together a team.

Along the way, Tett draws on stories from Tajik villages and Amazon warehouses, Japanese classrooms and City trading floors, all to reveal the power of anthropology in action.

The result is a revelatory way to explain human behaviour. In a short-sighted world, we can all learn to see clearly – using the power of Anthro-Vision.

Gillian is also the author of The Silo Effect, Saving the Sun and the best seller, Fool’s Gold: The Inside Story of J.P. Morgan and How Wall St. Greed Corrupted Its Bold Dream and Created a Financial Catastrophe. Gillian is U.S. Managing Editor and columnist at the Financial Times and has a PhD in social anthropology from Cambridge University.

Trump, Brexit and the dangers of modern political tribalism
Gillian gives an incisive and illuminating view on the current and emerging forces impacting our world today, both in the US and internationally.

Dazed and Confused: Making Sense of an Uncertain Economy
Gillian gives her views on the current trials and tribulations of the economy — she takes a global view and adds her individual focus on what lies ahead.

The Disrupted World
Today’s world is economically and politically unstable, anti-expert, post-truth, uncertain of its financial and physical borders. Gillan will outline why it is so crucial to take a joined-up view about what lies ahead for the political economy.

Fintech and Financial Markets — the road ahead?
Gillian warns on the trend between increasing reliance on complex financial instruments, the risks of relying on excessively expert experts and a world where fast returns are made on capital. We shouldn’t forget the lessons of a decade ago with Fintech strategies that few truly understood and which led to disastrous outcomes for many.

Why Every CEO Needs an Anthropologist
Gillian outlines the nature of ‘tribal’ behaviour and how organisations work as distinct societal groups. She gives examples where certain organizations developed ‘tunnel vision; and ways to survive this trap by expanding their thinking across boundaries by embracing diversity, holistic thinking and to design system-wide learning.

Silo-busting: a new perspective on why diversity really matters
Diversity has many faces and is an essential part of any healthy organization. She gives prime examples of where this lack of diversity led to catastrophic mistakes and also where it led to improved thinking and decision making. Within this area, Gillian also can talk about the boundary between finance and philanthropy and finance and technology.

Silo-busting; the secret to success in the tech world
Why do some companies succeed brilliantly, but others fail? Why do some executives seem to triumph in business, but others do not? If you ask many tech experts that question, they might point to skills in computer engineering. But as Gillian Tett will explain, citing the examples from well-known firms, that this only explains part of the tale. The other key ingredient which technology experts need to ponder is social engineering — or the importance of cultural and social patterns. And one of the most important of these cultural challenges is the problem created by silos — and the need to overcome this.

Ever since civilised society began, we have felt the need to classify, categorise and specialise. It can make things more efficient, and help give the leaders of any organisation a sense of confidence that they have the right people focusing on the right tasks. But it can also be catastrophic, leading to tunnel vision and tribalism. Most importantly it can create a structural fog, with the full picture of where an organisation is heading hidden from view. It is incredibly widespread: the chances are these ‘silos’ are rife in any organisation or profession, whether your business, or your local school or hospital.

Across industries and cultures, as this brilliant and penetrating book shows, silos have the power to collapse companies and destabilise financial markets, yet they still dominate the workplace. They blind and confuse us, often making modern institutions act in risky, silly and damaging ways.

Gillian Tett has spent years covering financial markets and business, but she’s also a trained anthropologist, having completed a doctorate at Cambridge University and conducted field work in Tibet and Tajikistan. She’s no stranger to questioning the assumptions and practices of a culture. Those in question – financial trading desks, urban police forces, surgical teams within medical clinics, software debuggers and consumer product engineers – have practices and rituals as ordered and intricate as those of any far-flung tribe.

In The Silo Effect, she uses an anthropological lens to explore how individuals, teams and whole organisations often work in silos of thought, process and product. With examples drawn from a range of fascinating areas – the New York Fire Department and Facebook to the Bank of England and Sony – these narratives illustrate not just how foolishly people can behave when they are mastered by silos but also how the brightest institutions and individuals can master them. The Silo Effect is a sharp, visionary and inspiring work with the insight, prescriptions and power to remove our organisational blinders and transform the way we think for the better. 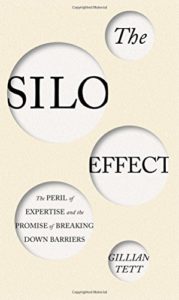 ‘A truly gripping narrative . . . The fact that Tett is able to reproduce such raw private communications is a tribute to her journalistic abilities’ Dominic Lawson, Sunday Times

‘Her blow-by-blow story is an impressive piece of detective work. She pulls back the curtain on a closed, unaccountable world of finance’ Will Hutton, Guardian

In the mid 1990s, at a vast hotel complex on a private Florida beach, dozens of bankers from JP Morgan gathered for what was to become a legendary off-site meeting. It was a wild weekend. But among the drinking, nightclubbing and fist-fights lay a more serious purpose – to assess the possibility of building a business around the new-fangled concepts of credit derivatives.

The group at the heart of this revolution was an intense team, made up of individuals with a supreme sense of loyalty to each other and to the bank – for years, nothing could break them apart. But when, finally, the team dispersed, the innovations spread far beyond their original intentions, producing perversions in the mortgage market that ultimately culminated in disaster.

Part real-life thriller, part investigation and exposé, this searing narrative takes us deep inside the shadowy world of complex finance – a perfect storm for the credit crunch.

For more than a decade, Japan’s dismal economy – which has bounced from deflationary collapse to fitful recovery and back to collapse – has been the biggest obstacle to economic growth. Why has the world’s second largest economy been unable to save itself? Why has a country, whose financial might in the 1980s was the most feared force on the globe, become the sick man of the world economy? Saving the Sun answers these questions and more in the riveting and remarkable story of Long Term Credit Bank, one of the world’s most respected financial institutions, and its attempts to transform itself into a Western-style bank and reconcile the cultural gulf that still exists between Japan and the international banking community. mart and engaging-it’s a riveting tale with important insights into Japan’s culture and its sclerotic system.’ Business Week’ Saving the Sun is not simply about the fate of one Japanese bank. It is about the clash of two visions of finance-and how hard it is to reconcile them.’ The Wall Street Journal Europe.