Lord David Puttnam is best known for a wide-ranging career in film, education and the environment as well as his work as an active Peer in the House of Lords.

He spent thirty years as an independent producer of award-winning films including The Mission, The Killing Fields, Chariots of Fire, Midnight Express, Bugsy Malone and Local Hero. Together these films have won ten Oscars, ten Golden Globes, nine Emmy’s, twenty-five Baftas and the Palme D’Or at Cannes.

Lord Puttnam retired from film production in 1998 to focus on his work in public policy as it relates to education, the creative and communications industries and the environment.

While filming Local Hero in the early 1980s, Lord Puttnam was invited to become president of the Campaign for the Protection of Rural England (CPRE), a position that helped cement his life-long passion for the environment. This commitment to safeguarding the planet was further consolidated when he became founding chair of Forum for the Future and culminated in his chairmanship of the Joint Parliamentary Scrutiny Committee on the world’s first Climate Change Bill. The eventual Act for which this committee was responsible (the Climate Change Act of 2007) contained the principal carbon limits and ‘terms of trade’ still adhered to today.  It also remains a benchmark to which many other nations aspire.

He was Founding Chair of the National Memorial Arboretum and for a number of years a Trustee of the Eden Project in Cornwall. His continued support for environmental matters was underlined by his appointment as International Ambassador for WWF and as a founding member of the Energy and Climate Intelligence Unit.

In 2019 Lord Puttnam was announced as the recipient of the TK Whitaker Award which recognizes Irish and international social and political leaders who have been exemplary in their contribution to public life.

In 2016 he was made a Fellow of the Royal Irish Academy and the following year elected an Honorary Life Member of the Royal Dublin Society.

Lord Puttnam has given numerous speeches on the subject of the global environment, including one at TEDxDublin in 2016 entitled ‘The Reality of Climate Change‘.

He has been the recipient of more than 50 honorary degrees from Universities in the UK, Ireland and overseas.

He is also the author of a book entitled  “Movies and Money” which has received rave reviews. 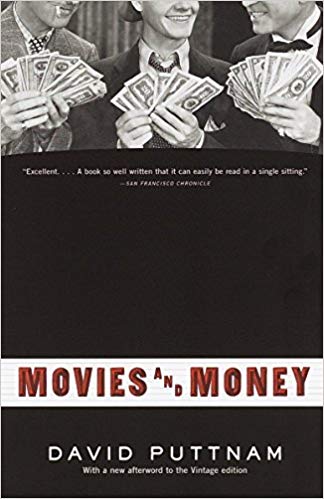 The acclaimed producer of such classic films as Chariots of Fire and The Killing Fields, and the only European ever to head a major Hollywood studio, former Columbia Pictures chief David Puttnam has written a fascinating behind-the-scenes history of the movie business and of the unique and frequently unholy alliance between commerce and art that underpins it.

A fascinating history.”–Time Out New York

Puttnam’s story moves from the early days of cinema and the rivalry between Edison and the Lumiere brothers, through the rise of the studio system, and up to the present day, with European filmmakers and politicians struggling to protect their industry and even their cultural identity from a triumphant and all-devouring Hollywood. In the process he introduces a host of colorful characters: from Goldwyn and Zanuck to Eisner and Ovitz.

Movies and Money is a groundbreaking book that will change our understanding of the movie business.

“Excellent…. A book so well written that it can easily be read at a single sitting.”- San Francisco Chronicle and Examiner

“Puttnam has a dry sense of humor, and most of his book is jammed with astonishing anecdotes and seething portraits of the personalities of film history.”– Newsday